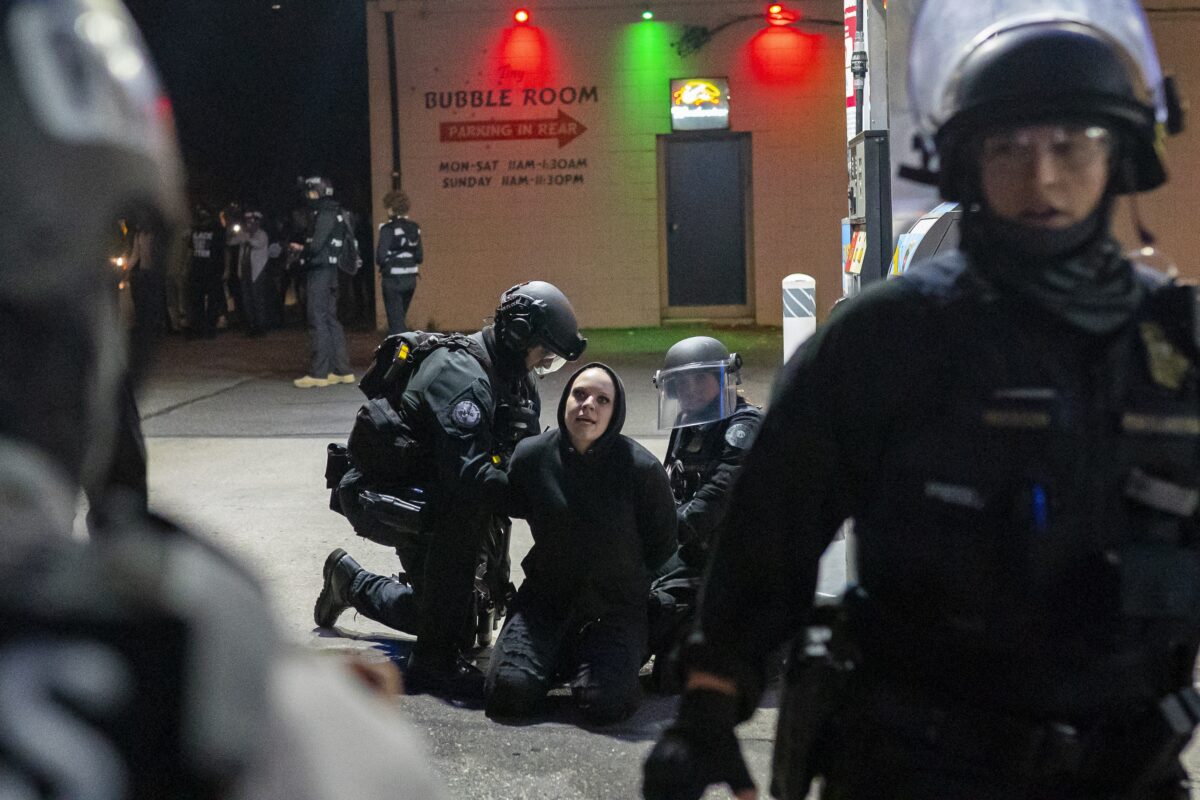 Twenty-seven people were arrested during rioting in Portland overnight on Sept. 4. A crowd began…

Twenty-seven people were arrested during rioting in Portland overnight on Sept. 4.

A crowd began marching to the Portland Police Association offices in the northern part of the city around 9:45 p.m. Many wore gear suggesting they weren’t planning to be peaceful, police said, including helmets, gas masks, and armored clothing; some also carried shields.

As the crowd reached the police union offices, they chanted “burn it down.”

Because rioters have repeatedly set the building on fire—and concern that a fire could spread quickly in the neighborhood due to the hot and dry weather—police officers moved to proactively prevent fires from being started by standing at the perimeter of the building, blocking the crowd from accessing the offices, the Portland Police Bureau said in an incident summary.

People in the crowd ignored warnings not to block the street. They yelled at officers and used lights and noisemakers.

Officers didn’t take any action for over 90 minutes until rioters started throwing rocks and other items at them. Officers began making arrests after the crowd didn’t comply with dispersal orders.

Twenty-seven people were arrested, including the driver of a vehicle that was helping support the riot. Police found an illegally possessed pistol inside the vehicle.

Those arrested included Maurice “Reese” Monson, who was quoted in the New York Times defending the actions of Antifa member Michael Reinoehl. Court documents showed Reinoehl was wanted for murder in the killing of a man in downtown Portland in late August.

Monson was charged with being a felon in possession of body armor, disorderly conduct, and interfering with a police officer.

Others charged included Micky Perry of West Virginia and Joshua Sooter of Missouri.

Video footage showed police rushing the crowd multiple times and making arrests. One woman shoved to the ground was bleeding. The woman was treated by a Portland Fire and Rescue field medic before being transported by ambulance, police said. However, she jumped out of the ambulance after it pulled away from the scene.

The gathering was promoted by Democratic socialist and Antifa accounts on social media. The image they shared said the event was to call for: “No Cops. No Prisons. Total Abolition.”

Riots have taken place nearly every night in Portland since May 28.

Daryl Turner, the president of the Portland Police Association, said in a recent CNN appearance that elected officials need to step up to end the violence.

Turner criticized the cuts to police funding the Portland City Council approved earlier this year as well as the new policy from the Multnomah County District Attorney’s Office that sees some charges linked to protests presumptively dropped, including riot, disorderly conduct, and interfering with officers.

Federal and state officials have escalated attempts to respond to the continued violence.

The FBI last month shifted resources to target people contributing to the unrest in the city and at least five people were charged on the federal level with civil disorder this week following bureau investigations.

State troopers sent back to the city following the deadly shooting were deputized in an apparent bid to skirt the new prosecutorial policy.

The Portland General Defense Committee, which describes itself as a legal support group that supports Antifa, said earlier Thursday that it confirmed reports of FBI agents visiting people’s homes in recent days.

“The result of some of these visits is that people with state charges, whether they have been no-complained or not, are being arrested by the FBI for federal charges of a similar nature,” the committee said in a statement.

Published in Crime, FBI, Political News and US News